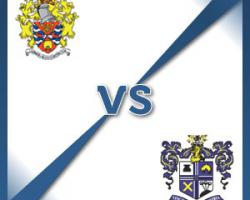 Dag & Red V Bury - view commentary, squad, and statistics of the game live.Agyemang to make final bowDagenham's Patrick Agyemang could play the final game of his loan spell against Bury.Striker Agyemang is due to return to Portsmouth following this game, along with defender Joe Widdowson - who is ineligible to play against his parent club anyway.The Daggers could persist with Jack Connors and Matt Partridge in defence after the recalled pair helped their side keep a first clean sheet since November in a 0-0 draw with Southend.Boss Wayne Burnett will still be missing long-term absentees Zavon Hines and Abu Ogogo

Nathan Cameron is expected to be fine to feature for Bury.The defender had to come off against Mansfield last Sunday with blood streaming from his nose following a blow to the face, yet Shakers boss David Flitcroft does not expect Cameron to miss any games.Striker Daniel Nardiello will sit out, though, because of a hamstring strain, joining Shwan Jalal (ankle), Pablo Mills (groin) and Keil O'Brien (knee) on the sidelines.Full-back Hayden White continues to be suspended after being dismissed against Northampton and he will have played his last game for Bury unless his loan is extended